WHAT H. P. BLAVASTKY WROTE ABOUT

Occult Roots of the Afghan War 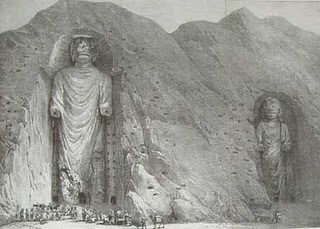 Since the end of  the Cold War, a new polarization of international and inter-cultural hostilities has seemed  to oppose Western culture and the Muslim world.

Looking at such a “conflict” from a theosophical perspective, it would not be correct to deny the mistakes of Western culture. They have been serious, and they are clearly described  in a text which some consider of great importance, signed by “A Turkish Effendi” and published  by H. P. Blavatsky in “The Theosophist”, March 1880. [1]

Yet there is another text, even more important, on the subject. It shows the occult side of  the difficult equation  between the Islam and Western nations. It also reveals some highly esoteric, historical roots of the present Afghan war.

H.P.B. wrote about the secret societies created in the Peshawar region,  where now Mr. Osama Bin Laden and the taliban have their strongholds in Afghanistan. Those lands include the border region with Pakistan. H.P. Blavatsky wrote about Mr. Abdul  Ghafur (1794-1877), the ruler of a tribe in  Swat, in Peshawar, now part of Pakistan. In an article published a few months after the death of  Mr. Ghafur, H.P.B. said:

“If there be truth  in the Eastern doctrine that souls, powerful whether for good or bad, who had not time in one existence to work out their plans, are reincarnated, the fierceness of their yearnings to continue on earth thrusting them back into the current of their attractions, then Ghafur was a re-birth of that Felice Peretti, who is is known in history as Pope Sixtus V, of crafty and odious memory.” [2]
Felice Peretti was Pope Sixtus V in Rome from 1585 through 1590. In his “Philosophical Dictionary”, Voltaire,  the 18th century French philosopher, describes Sixtus V:
“Sixtus V was born petulant, obstinate, haughty, impetuous, vindictive, arrogant: this character seems to have been curbed during the trials of his novitiate. As he begins to enjoy some influence in his order he loses his temper with a caretaker and  beats him with his fist; once inquisitor at Venice, he exercises his office with insolence; behold him cardinal, he is possessed della rabia papale: his rage subdues his nature; he buries his person and his character in obscurity; he apes the humble and the dying; he is elected pope: in this moment all the long-restrained resiliency of the spring, which policy had kept under control, is restored; he is the proudest and most despotic of sovereigns.” [3]
HPB compares Pope Sixtus V to the Akhund of  Swat:
“Both were born in the lowest class of society, being ignorant peasant boys and beginning life as herdsmen.  Both reached the apex of power through craft and stealth and by imposing upon the superstition of the masses.   Sixtus, author of mystical books and himself a practitioner of  the forbidden sciences to satisfy his lust for power and ensure impunity, became Inquisitor-General. Made Pope, he  hurled his anathemas alike against Elizabeth of England, the King of Navarre, and other important personages.  Abdul Ghafur, endowed  with an iron will, had educated himself  without colleges or professors (...). He was well versed in the Arabic and Persian literature of alchemy and astrology, as Sixtus was in Aristotle, and like him knew how to fabricate mesmerized talismans and amulets (....) .  Each held millions of devotees under the  subjection of their psychological influence, though both were more dreaded than beloved.” [4]

About  the Ghafur, the Old Lady writes that in spite the secrecy and mystery he imposed about his life, “the one certain thing is, that he was the founder and chief of nearly every secret society worth speaking of  among Mussulmans, and the dominant spirit in the rest.”

She adds that he used false antagonisms, stimulating hatred in both sides of political or social disputes.
This is important for students of theosophy to understand what happens behind the surface, in the first decades of 21st century, in the politics of mutual hatred between Western world  and  the Islam.

The very fact that this intensely hating  “Soul” was born once in the West and made the Christian Pope; and then was born  in a Eastern country to be a top Islamic religious leader, shows that the “disciples of hatred”, so to say, search for contrast and use antagonisms for their own purposes, though usually they disguise their hatred under apparently sweet forms of  religious feelings.

A MYSTERIOUS VISIT TO MR. GHAFUR

An influential islamic leader, Mr. Abdul Ghafur was also a quick reincarnation of Roman Pope Sixtus V; and there are other close inner  links between Islamic and Roman Christian fanaticisms , according to H.P.B. [5]

Mr. Abdul Ghafur created significant secret societies in Islamism from where he lived, in the region of Peshawar. It was not far from the cave systems where the sacred Bamian Statues (dating from the fourth race) were located until their recent destruction by the Taliban in 2001.[6]   This is the same region where nowadays the Taliban and Al Qaeda ‘mystical  fanatics’ have their strongholds and hiding places in Afghanistan and Pakistan.

Powerful as he was, Mr. Ghafur had his reasons to fear the Sages who work with truth, and who use honesty and compassion in their efforts to benefit mankind.

“One highly dramatic incident in the life of the ‘Pope of Saidu’ is the following well-authenticated case, which was much commented upon in his part of India [7]  about 20 years ago. One day, in 1858, when the Akhund, squatting on his carpet, was distributing amulets, blessings and prophecies among his pious congregation of pilgrims, a tall Hindu, who had silently approached and mingled in the crowd without having been noticed, suddenly addressed him thus: ‘Tell me,  prophet, thou who prophesiest so well for others, whether thou knowest what will be thine own fate, and that of the ‘Defender of  the Faith’, thy Sultan of Istamboul, twenty years hence?’ ”

The old Ghafur, says HPB, was “overcome with violent surprise”. He stared at his interlocutor, but no answer came. “In  recognizing the Sikh, he seemed to have lost all power of speech”, and “the crowd was under a spell”

HPB  describes the scene:
–  “If not’, continued  the intruder, ‘then I will tell thee. Twenty years more and your ‘Prince of the Faithful’ will fall by the hand of an assassin of his own house. Two old men, one the Dalai Lama of the Christians, the other the great prophet of the Moslems  – thyself – will be simultaneously crushed under the heel of death. Then, the first hour will strike of the downfall of those twin foes ot truth – Christianity and Islam. The first, as the more powerful, will survive the second, but both will soon crumble into fragmentary sects, which will mutually exterminate each other’s faith. See, thy followers are powerless [8] and I might kill thee now, but thou art in the hands of Destiny, and that knows its own hour.”

“Before a hand could be lifted, the speaker had disappeared”.

Roman Catholic Pope Pius IX held office from 1846 till his death in 7 February 1878 [9]. Abdul Ghafur died in 1877. As predicted, “the rival pontiffs of Rome and Swat” died almost simultaneously.
The  Hindu visitor was stern enough  when he defined  Christianity and Islam as “twin foes of truth”,  an expression which reminds one of the Prayag Letter from a Mahatma, and also of the Letter 10, in the non-chronological editions of  “The Mahatma Letters”. [10]
If one studies the Letter 120 (Chronological Edition) –  which is Letter 85 in the other editions of the “Mahatma Letters” – one sees that H.P.B.’s  Masters want the members of  theosophical movement to be open to contrasts while keeping peace in their minds and hearts. The Masters want the movement not to repress or deny, but to understand and to transcend, its own paradoxes and contradictions. Frankness is the best if not the only way to get  rid of occult hatred and psychological violence of all kinds. To look directly at contrasts with a calm attention and then to go beyond them: this is one of the ways for the thesosophical movement to help purify human mind as a whole.
As to the strategical aspect of  the presence of  Abdul Ghafur precisely in the Peshawar region, it is probably related to the occult importance of  that place.
It is in that region that the sacred  Fourth Race Bamian statues, commented by H.P. Blavatsky in “The Secret Doctrine” [11], were destroyed  between March 2 and March 11, 2001, by the Taliban/Al Qaeda  “mystical” terrorists.

The Bamian Statues are connected to the complex systems of caves once used by Buddhist Arhats and Ascetics, and now probably used (in that region) by some of the taliban and Al Qaeda members. These caves probably are also a perfect system of interconnected hiding places.
The destruction of  the Statues concluded in March 11, 2001, and  astrologically  March 11 and  September 11 make a direct opposition.

It is a well-known fact that the theosophical movement was founded in New York, and it is in New York that the United Nations (the outer seed of a future brotherhood of nations)  is based.  The city is a symbol of  the Western world.
As to the astrological opposition between March 11 and September 11, we may also take into consideration that the Madrid train bombings happened precisely in March 11, 2004 (causing some 200 deaths).
These are but a few hints. There is much to investigate about this. Yet one clear point is that theosophists all over the world should keep away from any intense hatred against the Islam, or against Western Society, or against anybody and anything at all. A sense of universal brotherhood among all religions should be stimulated instead.

The Eastern Sages and the Esoteric Philosophy promote universal understanding and unconditional respect among people. But they teach to observe and take lessons from  human failures and from contrast and contradictions, whose artificial  repression or denial  only creates hatred and hypocrisy.
One of the Mahatmas wrote in the famous Letter 120 (Chronological Edition):

“... discord is the harmony of  the Universe”.
Even before that Letter,  Alexander Pope, the English  poet of the 18th century, had already thus explained this aphorism of esoteric wisdom:

“All Nature is but art, unknown to thee
All chance, direction, which thout canst not see;
All discord, harmony not understood;
All partial evil, universal good;
And, spite of pride, in erring reason’s spite,
One truth is clear, whatever is, is right.” [12]

[10] The Prayag Letter is Letter 30 in the Chronological Edition (TPH, Philippines) of “The Mahatma Letters to A.P. Sinnett”. It is Letter CXXXIV in the edition of the Theosophical University Press (TUP, Pasadena, California), and in the edition of Adyar (TPH, India) of the same Letters. The Letter 10 (“On God”) of the TUP and TPH-Adyar editions corresponds to Letter 88 of the Chronological edition.