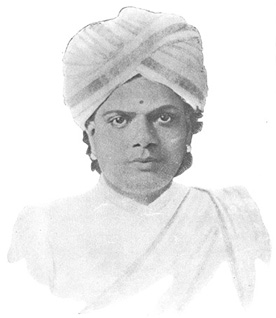 SOUTHERN India has always produced the greatest Aryan philosophers. Madhvacarya came from Southern India, and Sankaracarya was born in Malabar; and at the present day there are high adepts and schools of occultism in Southern India. In the adept hierarchy, there are always seven classes of adepts, corresponding to the seven rays of the Logos. Two of these classes of adepts are so mysterious, and their representatives on earth so rare, that they are seldom spoken of. Perhaps one or two adepts of these two mysterious orders appear every two or three thousand years. It is probable that Buddha and Sankaracarya come under this category. But of the other five classes of adepts, representatives are always to be found on earth. All five classes are represented in the Himalayan school. At present, it is unlikely that all five classes are represented in Southern India: though all the adepts of this and every other school must belong to one of these five classes.

It is a doctrine of the Southern India school that, though belonging to one of these five classes, and falling into one of these five rays, all of which are represented in the Himalayan school, adepts in India, for example, need not be correlated to the Tibetan school - need not dovetail, so to speak, into the guruparampara chain of the Himalayan school - and need not therefore owe allegiance to one of the five Chohans, or chiefs, of the five classes of adepts in Tibet.

When a great adept has passed away from incarnated life, his spiritual self may select some suitable person on whom to impress his teachings, who thus becomes his unconscious medium and apostle: this chosen exponent of the adept's wisdom may not recognize the source of his knowledge and power; to recognise their source is almost impossible, since these ideas are instilled into the inmost spirit of the man, the deep, secret place of his nature, from whence arise moral leanings and spiritual ideals. Such apostles have often found that their wisdom left them even in life; when their work was done, the over-shadowing adept often withdrew his inspiration. The over-shadowing by a high adept is what is called a divine incarnation, an avatara.

It is probable that Sankaracarya was such an incarnation. He was already a great adept when he was sixteen years old, at which time he wrote his great philosophical works.

It seems that Gautama Buddha was not such an incarnation as we see in him the actual life-struggle of man striving for perfection, and not the fruition of a great soul who has already reached his goal. But in Sankaracarya we see no such struggle; this is why we say he is a divine incarnation.

The seven rays we have spoken of represent the outflowing energy from the seven centres of force in the Logos; they represent seven forces, so to speak, which must enter into everything in the universe. No object can exist without the presence of each of these seven forces.

A man's past Karma determines which of the seven, practically speaking, five rays, of occult wisdom he shall take his place in; but it is impossible to say that the fact of belonging to one of these rays indicates the presence in a man of any particular moral or mental quality, such as patience, honesty, or courage, on the one hand, or the poetic or artistic faculty, on the other.

The Southern occult school divides the states of consciousness into three: (1) jagrat, or waking consciousness; (2) svapna, or dream consciousness, and (3) susupti, or the consciousness of dreamless sleep. As this classification stands, however, it is purposely obscure: to make it perfect, it must be understood that each of these three states is further divided into three states. Let us take these in their order beginning with the lowest.

To make this clear, the following table may be useful:

Above these nine stages, come the true mystical states of consciousness, to which the adepts have access.

In each of these classes of objects, which are on the different planes, there are five elements, each corresponding to one of the senses. In the view of the occultists of Southern India, it is erroneous to speak of seven senses, two being considered still undeveloped. It is true that there are seven factors in each plane of consciousness; but only five of these are senses, nor, in the view of this school, will there ever be two additional senses analogous to these.

The sixth factor is the mind, which rules and guides the senses, and draws deductions from their impressions when collected and arranged. The seventh factor is the atma, which is the observer of the generalisation which the mind makes from the impression of the senses. It is the self, the sense of "I," in us, behind which it is impossible to go, either in logic or in observation. The seven factors must be present on every plane: in dreaming, for example, objects corresponding to the senses of sight, touch, taste, smell and hearing, pass before the dreamer: his mind classifies these impressions and he feels the sense of "I," the observer which is subject of these subjects. There is the sense of "I" on each plane, but it is not quite identical, only the kernel, or basic notion of "I" remains unchanged.

When this mergence takes place, the man does not suffer loss of individuality; rather he enjoys an almost infinite extension of individuality. Each of the seven classes of Logoi has its own peculiar consciousness, and knows that this is so; that is to say, each Logos recognises its own light; but each Logos also participates in the life of all the other classes of Logoi; that is to say, the peculiar quality of their life is represented in it also; so that an individuality, in merging in a particular Logos, is not cut off from the consciousness of the other Logoi, but shares in, and experiences, their consciousness also.

This philosophy recognises two paths, both having the same end, a glorified immortality. The one is the steady natural path of progress through moral effort, and practice of the virtues. A natural coherent and sure growth of the soul is the result, a position of firm equilibrium is reached and maintained, which cannot be overthrown or shaken by any unexpected assault. It is the normal method followed by the vast mass of humanity, and this is the course Sankaracarya recommended to all his Sanyasis and successors. The other road is the precipitous path of occultism, through a series of initiations. Only a few specially organised and peculiar natures are fit for this path.

Occult progress, growth along this path, is effected by the adept directing through the chela various occult forces, which enable him to obtain prematurely, so to speak, a knowledge of his spiritual nature: and to obtain powers to which he is not morally entitled by degree of his progress. Under these circumstances it may happen that the chela loses his moral balance, and falls into the dugpa path. From this it must not be concluded that the Southern Indian school of occultism regards adeptship and initiation as a mistake, as a violent and dangerous usurpation of nature's functions.

The adept hierarchy is as strictly a product of nature as a tree is: it has definite and indispensable purpose and function in the development of the human race. This function is to keep open the upward path, through which descend the light and leading without which our race would require to make each step by the wearisome, never-ending method of trial and failure in every direction, until chance showed the right way. In fact the function of the adept hierarchy is to provide religious teachers for the stumbling masses of mankind.

But this path is eminently dangerous to those who do not hold the talisman which ensures safety; this talisman is a perfectly unselfish, self-forgetting, self-annihilating devotion to the religious good of mankind, a self-abnegation, which is not temporal, but must have no end for ever, and the object of which is the religious enlightenment of the human race. Without this talisman, though the progress of the chela may be very rapid for a time, a point will come when his upward advance will be arrested, when real moral worth will tell; and the man who progressed along the slow and steady path may be the first to merge himself in the light of the Logos.

This school recommended as the best path for all, a devotion to virtue, a gradual withdrawal from the grosser material concerns, a withdrawal of the life forces from the outward world and its interests, and the direction of these forces to the inner life of the soul, until the man is able to withdraw himself within himself, so to speak. Then, turning round to direct himself towards the Logos and the spiritual life and away from the material plane, he passes first into the astral life, and then into spiritual life, till at last the Logos is reached, and he attains Nirvana.

It is, therefore, wiser not to seek the path of chelaship; if the man is fit for it, his Karma will lead him to it imperceptibly and infallibly; for the path of occultism seeks the chela and will not fail to find him, when the fit man presents himself.

[the foregoing is a summary of a discussion with Mr. Subba Row at the Adyar Library, held on 1st December, 1888. - Ed.]